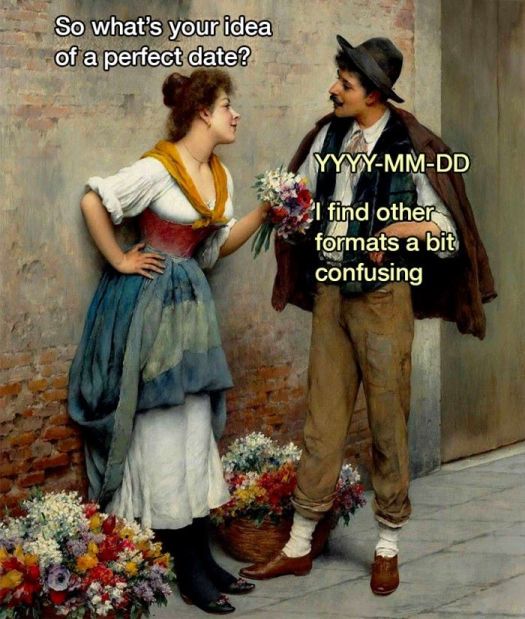 I tend to go with the safe picks in dating. My imposter syndrome dictates that I feel undeserving of good things. That generous, beautiful, intelligent woman falls completely out of my league. There is no way she would be interested in a geek, freak, and all around reject like myself. Her laughter at my jokes sounds hollow with platitude.

Friends express disappointment in my picks. They picture me with the generous, beautiful, intelligent woman. Instead I barely muster the courage to handle the nice, homely, average woman.

It will never work because how can one build a relationship on a facade?

Cargo pants allow you to hold practically anything except for a conversation with a woman.

My default outfit outside of work is teeshirt, cargo shorts, and sneakers. Back in the day, the sneakers were sandals often with socks. 🙂

Schrödinger’s cat is a thought experiment, sometimes described as a paradox, devised by Austrian physicist Erwin Schrödinger in 1935. It illustrates what he saw as the problem of the Copenhagen interpretation of quantum mechanics applied to everyday objects. The scenario presents a cat that may be simultaneously both alive and dead [until being observed by the external universe collapses the system into one or the other], a state known as a quantum superposition, as a result of being linked to a random subatomic event that may or may not occur. The thought experiment is also often featured in theoretical discussions of the interpretations of quantum mechanics.

It might be fair to say I am in love with uncertainty. Maybe that is why I turn to books about physics or cosmology when work has me extremely stressed? I thought that it was because I would overwhelm my brain with something else. But maybe it is because I so very love the principle of things existing in superpositions until we force them into a position.

Until one asks out the girl, it is in a superposition state. The yes/no simultaneously exists until I ask. That trite “at least you asked” when she says no never comforts me. I am hurt because I was rejected. Here’s the thing… When she says yes, I get really terrified. So the only time I am happy is in the state of uncertainty where I do not know. All the possibilities are on the table. I can dream about where it could go without being committed to a state I cannot handle.

I’m thinking of adding this to my answers to “Why are you single?“

Several of the women I count as friends are single. Occasionally something happens where they complain about the challenges of having this status. When this happens, I usually feel guilt for having never attempted to date her.

It is some kind of weird hubris that in the moment, I feel that I could be the solution to her problem.

My normal doubt in my ability to be a good partner eventually overwhelms that hubris. In the end, I convince myself that I am actually performing her an enormous favor by not inflicting myself on her. I am such a good friend.

The other night I decided to go to one of the local taquerias for dinner. When a guy I knew in college ran it, for a couple years I was in there about every week. Then I stayed for a couple nice bartenders. About a year ago I stopped going.

This girl sat next to me at the bar. I did look at her and smiled when she pulled out the chair. It was kind of odd because there were lots of other chairs. So she chose to sit next to me.

She asked the bartender about the spiciness of the Hot Taco special. And decided to go for it despite the warning that it was the spiciest thing the bartender knew. Well, it was apparently too hot. While she waited for the bartender to ask about something else, I asked her, “So hot really is hot?” Apparently that was just the ice breaker she needed because we ended up chatting about all kinds of stuff. As she left, she asked “Same time and place next week?”

UPDATE: So I made sure to put on my calendar to go. I went. She was not there. I had strong doubts she show. Maybe it was facetious. Maybe she changed her mind. Anyway, I probably would have found it extremely strange for her to show.

Found this story interesting. I was a very disagreeable teen and still am as an adult.

In my early 20s, I did hold the view that everyone else was the problem. By 25, I mostly lost that view. I am still disagreeable, but I know that it is all me and in my head.

And I have poor relationships still because I do not really wish to inflict it too much on others. It is exhausting being nice. Between being nice enough to not get fired from my job and navigate society, there is not enough willpower capacity left over to attract and maintain a close relationship.